In these weeks after Easter I remain two weeks ago in that resurrection weekend. Our church, like all the rest, is meeting remotely. We hear sermons and worship from afar and then connect with each other in smaller groups using social media. We are “doing” what has historically been called Eastertide – continuing to celebrate the miracle for 50 days until Pentecost (the arrival of the Holy Spirit).

At HBU, our faculty in my School of Humanities, have been sharing a devotional twice a week. These have also focused our attention on events after Easter. Today’s devotion was about the Apostle Thomas – who we all identify with and call  Doubting Thomas.

I noticed something today that I had missed before.

One of the twelve disciples, Thomas (nicknamed the Twin), was not with the others when Jesus came. They told him, “We have seen the Lord!” But he replied, “I won’t believe it unless I see the nail wounds in his hands, put my fingers into them, and place my hand into the wound in his side.”

Eight days later the disciples were together again, and this time Thomas was with them. The doors were locked; but suddenly, as before, Jesus was standing among them. “Peace be with you,” he said. Then he said to Thomas, “Put your finger here, and look at my hands. Put your hand into the wound in my side. Don’t be faithless any longer. Believe!”

“My Lord and my God!” Thomas exclaimed.

Then Jesus told him, “You believe because you have seen me. Blessed are those who believe without seeing me.”   (John 20:24-29)

After the resurrection, Jesus appeared to a great number of his followers – to confirm his resurrection. But what I noticed today was this particular special trip that Jesus made. Remember, eight days earlier he had appeared to the disciples as they were hiding out behind a locked door. He gave them a mission to go and share the Good News. Thomas was absent from this gathering.

Jesus returns, eight days later, to find his followers still cowering in fear behind locked doors. They were not following orders. But isn’t it remarkable that Jesus comes back to find Thomas, the follower who was so vocal about all his doubts.

What kind of lesson is this for me and you? What do we do about our constant need to prove ourselves, to earn our way, to keep God happy with us?

I looked at this passage in The Message, when Jesus came for this second time he focused his attention on Thomas. That’s what hit me between the eyes. The greatest movement in the history of humanity is about to be launched and Jesus returns to see about Thomas. Church history tells us that Thomas was the disciple who took the Good News further than any other – he went all the way to India. That meeting changed him forever.

What would a meeting with God do to you?

“And who will care, who will chide you if you wander away from wherever you are, to look for your soul?” ― Mary Oliver

We remember the one-to-one meeting that Jesus had with Peter (John 21:15-17) – who was carrying the guilt of denial heavy in his soul. Paul writes that Jesus also spent time with his brother James (1 Corinthians 15:7) – who at first tried to talk his older brother out of his controversial mission but would later become the leader his church in Jerusalem. What did they talk about after the resurrection?

Today I realized that one crucial message and meaning of Easter was that God is willing to search for me, like Thomas. As many doubts as I have and express with my words and actions, these are not going to stand in the way (like those locked doors) of him finding me. 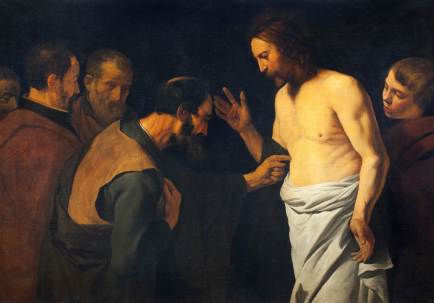 What a wonderful message in the story of Thomas – I’m going to stop calling him by that old nickname. Instead he now reminds me that no one is immune to God’s love and search.